True to every stereotype, it’s a beautiful Spring day up on Lake Como and I’m sitting on the sheltered terrace of Crotto di Biosio, feeling like I’ve hit the jackpot in some game called la dolce vita. Of course living in Italy isn’t all dolce vita, by any means. My life is very probably your life, and the only real difference is I’m doing it in Italian. And besides, we’re up in the north and the dolce vita always reminds me of Rome and Anita Ekberg in the Trevi Fountain in Fellini’s film of the same name. Any nothern Italian version would have to be in Milan, and not the usual frenetic face of Milan, but an older Milan, slightly more weathered with age and only truly discovered on a closer look. And if you want to apply it to Lake Como, it would definitely be more Grace Kelly in a vintage convertible with a silk Hermès headscarf. Not sure my B-Max would have quite the same effect.

In any case – dolce vita or not – there’s something about this place that just encourages a more laid-back, chilled approach to the whole affair of life. And Lake Como really is as beautiful as they say. Wordsworth, Shelley and Byron all waxed lyrical about it, and you only have to come up here to understand why.

So here I am at Crotto di Biosio, a typical rustic restaurant that lies in the hamlet of Biosio just above Bellano. It’s a homely, friendly type of place that sells itself to you not just for the food but also for the view. Originally known as Crott de Balin, it’s a usual stop along the Viandante that stretches along the eastern fork of Lake Como. Viandante literally means a route on foot, or in this case path along the lower parts of the mountains that stretches 45 km from Abbadia as far as Colico at the north of the lake. Crott de Balin was (and still is) the type of place where you knew you could stop off for a drink and something to eat. It was also a popular place for the Bellano locals to while away a Sunday afternoon, playing cards whilst drinking the odd carafe of wine and a plate of salumi or cold meats.

The crotto passed to the Denti family during the 1960s, and today I’m welcomed by Mauro Denti’s grandson. It’s a family business that’s stood the test of time and some of the family are on a table next to us as they take a break from producing the olive oil in the building below the terrace. It’s also a place I’ve come to with my family when family and friends have visited and we’ve brought them to Lake Como. I have photos of a lunch we had when my elder son was christened, of my son’s first birthday party and other more recent visits. It’s part of the home, my home, in what was once only foreign.

Mauro’s grandson recommends the chisciöi. Chisciöi is a word in the dialect that comes from the Valtellina valley, the large flat valley that begins above the top of Lake Como. They’re literally pancakes made with buckwheat flour and fried until crisp, and then filled with Casera Valtellina cheese, a cheese produced in the province of Sondrio that’s been around since the 16th century. It’s a bit like a type of pancake sandwich, crisp and oozing with melted mountain cheese, and all served on a bed of thin sliced chicory, a typical accompaniment to dishes from this area. And oh my word, are these moreish.

As I sit and eat my chisciöi and survey the view of the lake, it’s easy to imagine how the crotto formed a welcome break (and still does) for walkers along the Viandante. Only today I haven’t walked the Viandante. I’ve driven up via a stop at Varenna, and a fascinating encounter with an elderly lady who used to own the bed and breakfast in the square where some of family stayed when I got married there. It turns out she’s an Italian teacher and a writer of children’s books, who came to the lake with her family to escape the genocides in Armenia nearly a hundred years ago. She gives me her phone number and we agree to meet another day. Another chance encounter, and another story to be told. 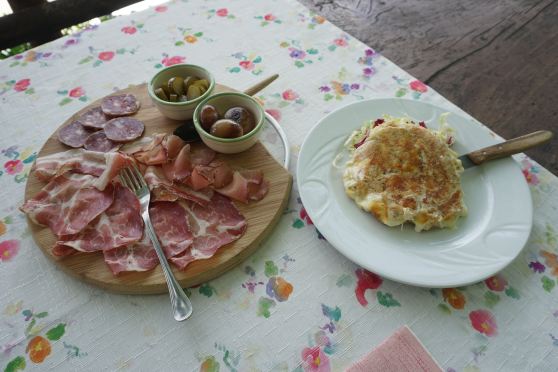 Rachael Martin is a writer and journalist who came to Italy from the UK over twenty years ago. She writes about travel, food and culture in Italy.