Skip to content
If we’re talking lasagne, then it’s a tale of two. The first is my mother’s from my childhood, when lasagne was a food of 80s dinners, along with the stir fried chicken that came from her copy of the St Michael Cookery Library’s Chinese Cooking. It was often made using dried lasagne verdi, and generally served with chips – the soft thick type that were browned at the edges, salad and garlic bread, and I have a vague recollection that coleslaw sometimes made an appearance. For years, this for me was lasagne. The second version is truly Italian, and comes from eating it for so many years at various Italian tables. There was once a version that included slices of boiled egg, made by a friend’s mother who came from Baslicata, because how you make your lasagne is often a sign of where you’re from. Lasagne with slices of boiled egg. Who’d have thought it could taste so good.
It was Sunday and I’d been listening to the Radio Four dramatisation of Claudia Roden: A Book of Middle Eastern Food. If you haven’t listened to it, do, because it’s a celebration of how food is a part of our culture and who we are. Food is connection and at times that can be everything, as is evident in Roden’s tales of how she left Egypt for Paris, and then for London, and lived out her exile. It’s often a way of creating home, and it matters.
It mattered as I stood in my kitchen and made meatballs that Saturday. It matters as I make pizza on a Wednesday night. Joan Didion sums it up when she speaks of how she learned to “find equal meaning in the repeated rituals of domestic life. Setting the Table. Lighting the candles. Building the fire. Cooking. All those souffles, all that crème caramel, all those daubes and albondigas and gumbos.” (The Year of Magical Thinking) She goes on: “These fragments I have stored against my ruins, were the words that came to mind then. These fragments mattered to me. I believed in them.”
And so off went my husband to look for dried lasagne verdi in the village where we live just north of Milan. He didn’t find it, came home and suggested we make it. “Make it?” The idea seemed almost absurd. You didn’t make fresh lasagne for this lasagne, you bought it in a packet. And it was thick, and crispy around the edges where the sauce hadn’t covered the lasagne.
When I put it on the table, the reaction was interesting. Lasagne is always a winner in our house. But lasagne with salad? On the same plate? It was breaking the laws of Italian food, and Italian food is a serious business. Lasagne is a primo – a first course – and eaten alone. My husband didn’t even go there. Lasagne first, salad second. Neither did my elder son, although that was because salad is green and green rarely features on his plate. My younger son copied me. Lasagne, salad and a wedge of garlic bread. Then he started eating and a divide began to appear between lasagne and salad. There was no way his salad was getting soggy with béchamel sauce.

It made me smile somewhat. My lasagne belonged to a time of stir-fried chicken in oyster sauce and chicken in a basket when we were on holiday at the seaside and went for a pub lunch. It represented the foreign, if not the exotic. In theory it’s the same dish, yet it will never be the same dish as the lasagne I’ve eaten and learned to make in Italy just as the lasagne I eat in Italy will be the lasagne of my childhood. Unless I cook it.  Maybe it’s a dish that for the moment still belongs to the UK. It belongs to dinners in my mother’s kitchen when we go to visit my dad, only now I’m the one that’s cooking it. It fits there. Although as I write this, I can’t help thinking that one day it will fit here too. When there is no longer any context for it, it will matter very much. 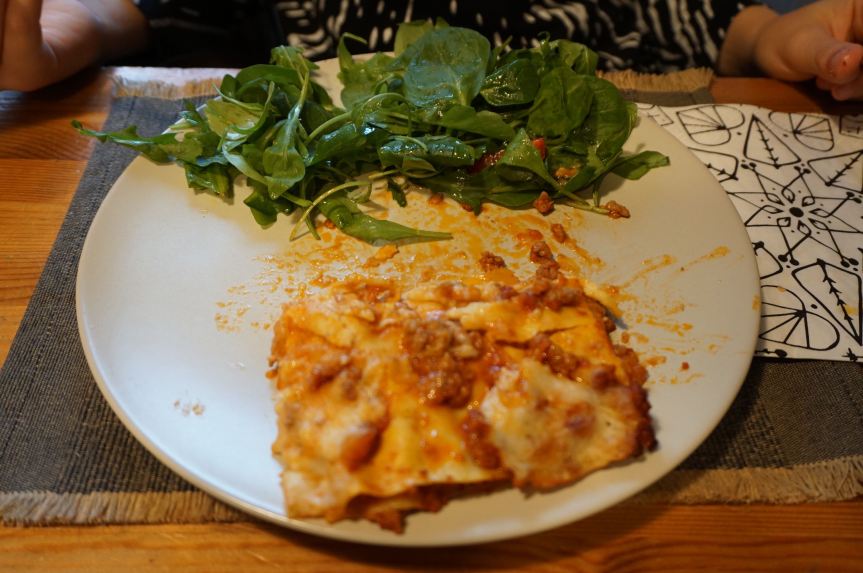 Writer, journalist, eater. Writes about Italy a lot. Has a thing about trains and motorway signs. Often found in the kitchen.

Some cheeses are better than others. I still have this thing about cheeses in packets. This came from the guy whose lorry stops at the end of my road and all the elderly ladies gather for a natter and a shop. It’s Casera from the mountains near here. I also got a very nice pecorino from Sardinia. Now reminiscing about eating cheese in the Valle dell’Erica between Palau and Santa Teresa di Gallura.
During lockdown, when we couldn’t walk further than 200m from our house, I spent two months just at home with the kids because that’s what you do when there’s so much suffering and death happening and reports are coming from the hospitals comparing it to a front line situation. I had no real reason to go anywhere and so I didn’t, and then I couldn’t anyway. The only thing I wanted to see when we could walk out of our homes again and go for a walk were these mountains. Tonight I was lucky enough to see this which means such a lot tonight because everything else pretty much faded into insignificance.
Happiness is a lunch of orrecchiette con cime di rapa and a touch of garlic and chilli. Takes me back to days in Puglia years ago and eating the most divine pasta e ceci (pasta with chickpeas) I’ve ever tasted in a restaurant in Lecce.
Morning walk 🏔☀️❤️
When they’ve all gone out. This is the thing I’ve missed most, being home alone, just doing my thing. I ordered this for Mother’s Day a couple of weeks ago so they’d have something to give me. (Always plan in advance and all that.) Can’t wait to dive in.
Favourite pasta dishes: spring onions, cherry tomatoes and black olives, fried softly in a pan and added to pasta and pecorino cheese